Destinations Featured Florida The South USA
May 21, 2012May 14, 2013 Gary C. Daniels Tampa Florida, Things to do with kids in Tampa Bay

I was heading south of Tampa on Highway 19 to visit the South Florida Musuem in Bradenton when I saw brown signs stating “Madira Bickel Mound State Archaeological Site.” I remembered reading something about this site and so I asked my almost-four year old daughter, “You wanna go to a park?” She responded, “Yeah!” so we decided to give it a look. 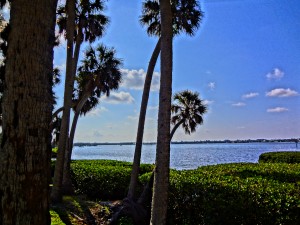 We turned right off Highway 19 onto Bayshore Drive at a small gas station convenience store. This road drove right along the side of the Tierra Ciea Bay and was lined with palm trees and mangroves. Every so often a break in the greenery gave way to a magnificent view across the bay. On the opposite side of the drive were many beautiful houses deserving of their waterfront location.

I came to a fork in the road and saw another brown sign for the Madira Bickel Mound that appeared to suggest to head straight. I did so and took a narrow, barely two laned road on a loop past many more magnificent houses and eventually came back to Bayshore Drive. I realized I had obviously chosen the wrong fork to follow and so turned left and returned to the fork in the road and this time veered right. 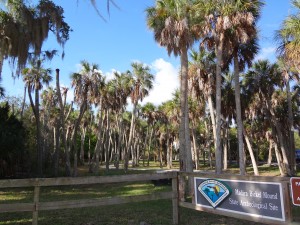 Just down the street I finally saw the signs for the park. I pulled into a small dirt and seashell parking lot and parked next to the Madira Bickel Mound State Archaeological Site sign.

A winding white cement pathway led through a grove of palm trees towards a ramp or stairway. Along the way there was a large sign with pictures and information about the site. From this sign I learned:

“This large ceremonial mound and the adjacent Prine burial mound were part of an extensive village and mound complex, now called the Terra Ceia site, that once occupied much of this peninsula…This ten-acre park is nearly all that a remains because of residential development and road building. Research indicates that these mounds were constructed and used from approximately 1500 to 800 years ago, a time referred to as the Weeden Island period. Large flat-topped mounds such as Madira Bickel typically had large structures on top for ceremonial events, or as residence for important persons. This site is one of several similar mound complexes in the Tampa Bay area. 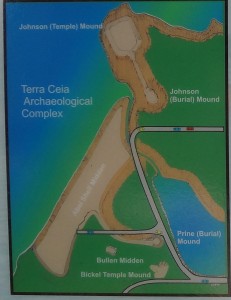 The sign had a diagram of the site including a drawing of a large temple mound. It was pentagonal in shape and reminded me of many of the pyramids in Mexico. Further down the diagram was the Madira Bickel Mound which was more rectangular in shape. There has been much speculation that the ancient Maya built outposts in Florida and this could likely have been one such outpost. Although other theories say this was built solely by Florida’s Native Americans with no help from outside sources.

I realized that this mound was directly behind the sign I was reading though at first it wasn’t obvious because it was completely overgrown with trees and vegetation. In fact, it would have been very easy to walk right past without ever noticing it had you been an early explorer to the region. Only the manmade ramp heading to the top of the mound gave away its location.

While reading the sign my daughter was busy chasing the large lizards that made the park home. It seems all the reptiles in this part of Florida were supersized including the lizards. Noticing my three year old was getting a little antsy waiting for me to finish, I hurriedly scanned the rest of the sign. 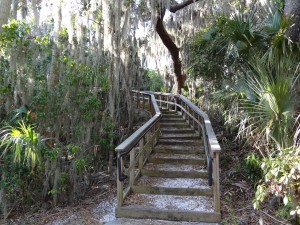 After finishing reading we headed towards a ramp or stairway which led to the top of the mound. My daughter quite enjoyed climbing up this ramp to the top of the mound. Once at the top there’s really not much to see since it is completely overgrown with trees and other vegetation. The top is surrounded by a manmade fence to keep people from inadvertently falling down the steep sides of the mound. You have to use your imagination to envision the large house or temple that once existed here. Luckily, the previous sign included a photo of a replica of the inside of this house. 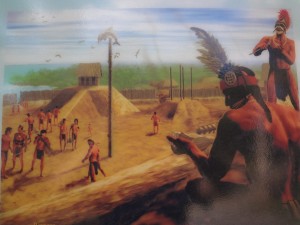 I walked over to the fence and peered down. It appeared I was at least twenty feet above the ground. Imagining the trees and vegetation cut away it was easy to envision how someone standing at the top of this mound would have a commanding view of the village below and probably could see directly to the nearby Terra Ciea Bay. Clearly this person was greatly revered by the people who lived below.

As we returned to our car I couldn’t help imagine what life was like here 1,000 years ago when this site was at its peak. I’m sure they traded with their friends, fought with their enemies, and spent their days trying to procure the basic necessities of life. I’m sure kids ran and played through the village while their mothers made pottery or wove baskets as other women prepared the communal meals.

As I buckled my daughter into her car seat and got into my car I was brought back to the 21st century and grateful for my brief travel back in time at the Madira Bickel Mound park.