Giant elephants used to live in Florida. That’s one of the first things you learn upon entering the Florida Museum of Natural History in Gainesville, Florida. As you stand face to face with the skeletons of two of these ancient creatures you realize that you are about to be transported back in time to a Florida much different than the one we’ve all come to know and love. 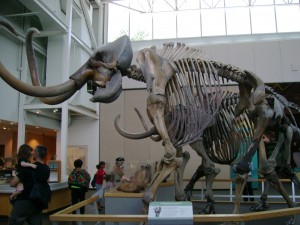 In fact, the two skeletons on display come from not one but two separate species of elephants: the American Mastodon and the Columbian Mammoth. Both skeletons were found in the same north Florida river.

Yet these two skeletons offered just a glimpse of the many fossil skeletons of ancient sealife and land animals that made their home in Florida. The Hall of Florida Fossils is filled with an impressive assortment of other ancient animals from Florida’s prehistory but we would save this exhibit for last. First we visited the Northwest Florida exhibit.

The Northwest Florida exhibit follows the route water takes in its quest for the sea. Don’t worry, if that doesn’t sound very exciting because you are in for a treat. This is a very surprising and very well-done exhibit. You begin a highly detailed recreation of a Hammock Forest with over fifty different plants and animlas for visitors to locate from high in the trees to under logs on the forest floor. It is here that water begins its journey, falling as rain and soaking through the ground into underground caves and aquifers.

Next you enter into a recreation of an underground cave. No detail was left out of this full scale replica of a northwest Florida cave. Upon exiting the cave you enter a pitcher plant bog modeled after bog communities around Eglin Air Force Base. 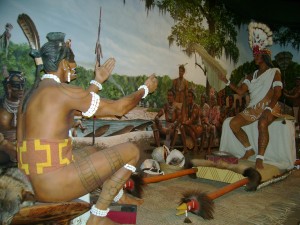 From here you enter a river scene but not in the present day. This scene takes place along the Apalachicola River over 700 years ago and depicts a Native American trader from the Etowah Mounds site in north Georgia visiting a chief at the Lake Jackson Mounds site near Tallahassee. This was by far my favorite part of the exhibit since I have a strong interest in Native American history and culture. I thought this exhibit really helped dispel the many Hollywood stereotypes about Native Americans and showed a more accurate representation of the native peoples of the southeast. 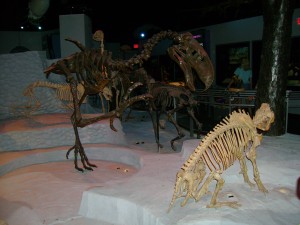 The Tidal Marsh exhibit and the Barrier Island exhibit are the last two in the Northwest Florida Hall. From here we entered the very exciting Hall of Florida Fossils.

This massive exhibit is filled with the fossilized skeletons of animals which once inhabited Florida. In fact, most of the skeletons were found within 100 miles of the museum! The most interesting thing about the exhibit is how all the animals are in active poses seeming to interact with one another. This makes the exhibit come alive and helps you imagine what it must have been like when these creatures roamed Florida. 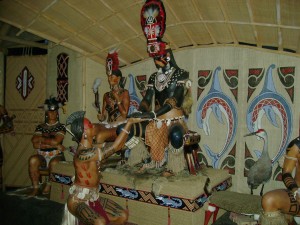 The next exhibit we entered was South Florida: People & Environments. This exhibit also had a Native American theme and was another favorite of mine. The exhibit recreates the coastal fishing villages of the Calusa Indians, one of the first Florida tribes to encounter Europeans. My favorite part of the exhibit featured a recreation of a Calusa leader’s house. The exhibit brings alive the great artwork of these people and if you hang around for awhile and look closely during the “lightning” effect you might just see a few extra people in the scene behind the great chief. 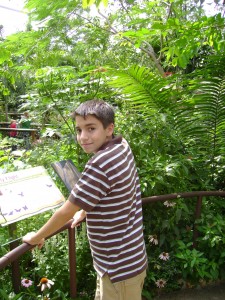 The next exhibit we visited was the Butterfly Rainforest. This exhibit takes you outside into a tropical rainforest filled with an amazing variety of butterflies. Florida is the last stop for monarch butterflies before their epic migration to Mexico thus this is a fitting exhibit. A local butterfly farm provides all the many butterflies and this makes for a perfect end to our trip to the Florida Museum of Natural History. If you’re ever in Gainesville, Florida or just passing through on I -75, this museum is definitely worth a look. Just make sure to give yourself several hours to fully appreciate everything the museum has to offer.