Poe Springs, located in High Springs, Florida near Gainesville, is a county park and natural wonder that serves as the gateway to other natural wonders such as Lilly Springs and Rum Island Springs all reachable by canoe which you can rent from the park. Home to a great variety of wildlife and plant life, you’ll definitely want to bring your camera along for the adventure.

Upon arriving at the park we paid the small rental fee and picked up our life jackets and paddles. The attendant instructed us to pick up our canoe at the landing site on the Santa Fe River. After a short bathroom break we headed to the river.

The water seemed incredibly shallow probably due to the drought at the time. It seemed once we were all in the canoe we were almost dragging bottom. The water was also choked with aquatic grasses but once we muscled our way to the center of the river it became much easier. 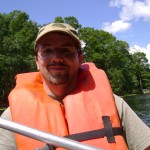 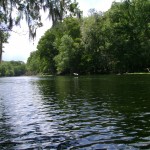 But eventually we started to get the hang of it and began enjoying the beautiful scenery along the Santa Fe. The river is fed by several springs (including the Ichetucknee which is a tributary) thus the water is crystal clear and quite cool. As we paddled down the river we saw signs indicating Lilly Springs, another spring that feeds the river but we chose not to explore them and instead continued floating down the Santa Fe. We only occasionally had to paddle since the current moved us continually forward. 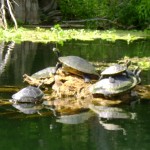 Our leisurely pace enabled us to fully soak in our surroundings. The natural beauty of the Santa Fe and its environs is almost overwhelming. There area is teeming with life. We came across a family of turtles sunning themselves on a log. The larger turtles took possession of all the prime real estate on the log. The smaller turtles would not be so easily thwarted though and simply took up residence on the larger turtle’s backs! 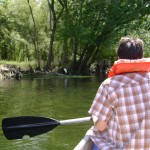 Turtles were not the only animals of interest along the river. We saw several large white herons fishing in the shallows along the bank. (You have to look closely but the white speck in the photo at left is the heron.) We paddled as close as we could in order to take a photo but I guess we entered into his comfort zone and he flew away. It was quite impressive to see such a large bird take flight! But it would not be the only species of birds we would see on our journey. 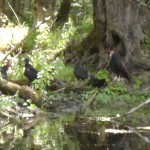 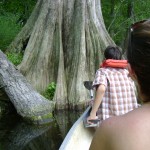 Birds and reptiles were not the only life forms of interest. The riverbank was lined on both sides with a great variety of trees. The most impressive were definitely the great cypress trees. The base of these trees were massive.

We were all starting to need a break from the hot sun when in the distance I spotted a change in the water color. A portion of the river close to shore was a brilliant blue color. As we got closer I noticed this pool of water was perfectly circular in shape. “That’s a blue hole,” I exclaimed having read about these spring heads a few days earlier. As we approached the blue hole we saw a sign with the words ‘Rum Island’ painted on it. Several families were splashing in the water and we soon found a landing to pull our canoe ashore.. 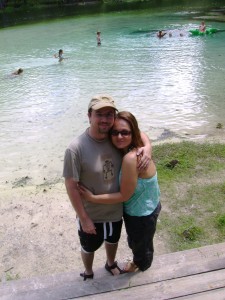 It was such a nice surprise to find this place. I had no idea it was down river from Poe Springs but it couldn’t have been placed at a more perfect spot. I guess it was about an hour and a half down river from Poe Springs thus making a perfect place to come ashore and take a break. A small park with picnic tables was available for guests to eat and rest. And the blue hole itself provided a great place to swim and wade. (Look closely in this photo and you can see the darker waters of the Santa Fe river in the background contrasted by the light blue water of Rum Island Springs.)

At the center of the blue hole was the spring which created it. Kids with scuba masks were going under and trying to get a peek inside the opening to see from where all this spring water was coming. 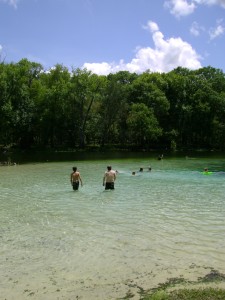 After swimming for awhile and eating our trail mix and other snacks we decided it was time to head back to Poe Springs. Just as we got back to the center of the river to head home it began raining. This just added to the adventure and so we paddled on. It was a little tougher going back since we were now paddling against the current but it was still manageable. But once we got back to Poe Springs we encountered a much stronger current that took all three of us paddling in unison to overcome. But we made it and pulled our canoe ashore without incident.

Once ashore we walked down to the namesake of the park- the Poe Springs. This was another crystal clear spring but not quite a blue hole like at Rum Island. We took in the natural environment and was amazed by a part of Florida we didn’t know existed. These inland springs and the crystal clear rivers they form are a jewel in Florida’s crown. If you only think of Florida as sandy white beaches then leave the seashore and come inland and you’ll be in for a great treat.